The story of Dr Scott Ling

Dr Ling has spent the last 30 years working in the field of Chinese Medicine. His passion for helping patients is second to none, with his main philosophy founded in the root of nature. From humble beginnings, Dr Scott Ling was born in Borneo and grew up living in a wooden house on stilts for the first 17 years of his life. Dr Ling is a philosopher at heart known for his inspiring antidotes. Dr Scott Ling says: “I think being in nature really helps to cultivate inner harmony”.

“Go hug a tree,” he told Valentine at one of her first treatments.  Dr Ling was first exposed to Chinese Medicine and Acupuncture as a young boy after his 80-year-old Grandfather suffered extreme pain in his leg, affecting his ability to walk.  “I remember my Grandfather being treated by Acupuncture and after just one treatment he was able to start moving again”.

“Acupuncture is a process of needles on the human body to induce allow healing processes to create energy flow or better blood flow to help the person to be able to activate healing abilities,” explains Dr Ling. “I treat the person, not the symptoms because l like to help the person achieve deeper healing not only symptomatic relief. By just looking at the trees, most of the time people forget about the forest.” 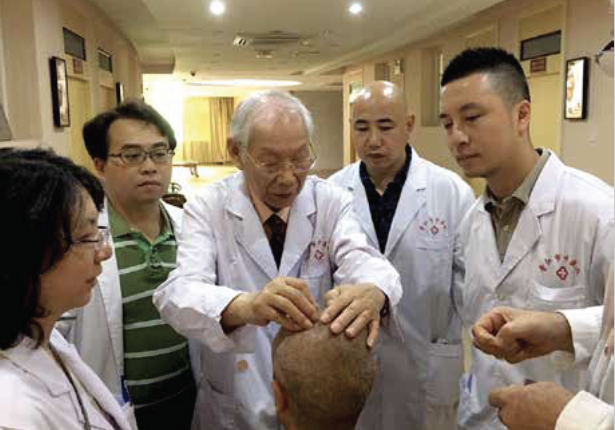 Dr Ling’s father sent his son away to study in Shanghai at the age of 17. Between 1998-2004, he attended one of China’s top Universities, Shanghai University of Chinese Medicine and interned at several larger integrated Hospital’s whist attending University. He graduated with a Bachelor of Medicine (Integrated Chinese and Western Medicine). In 2004 he went on to open his first clinic in Malaysia, quickly gaining experience treating a diverse range of medical issues.

In 2006, Dr Ling moved to Australia in search of new opportunities. “l started from nothing, even my wife worked so l could afford to buy herbs for my patients. My first year was hard as l was trying to rapidly improve my English.” But it didn’t take Dr Ling too long to adjust to his new country and get established.

In 2009, just three years later, he opened his clinic, Sustain Health, in Port Melbourne, and he has been in the same location, the same practice, ever since.

Over the past 15 years, the clinic has grown and gained a loyal following of regular patients. Dr Ling works tirelessly to treat patients with a wide range of illnesses. Over the years he has specialised in a few key areas.

In 2020 Founder of tac., Valentine Mirzayantz, was recommended by a friend to see Dr Scott Ling. By 2020, Valentine had suffered from chronic asthma and severe food allergies for many years and her health was at its lowest point yet. In June of that same year she was rushed to hospital twice in the one month – the first time for asthma, the second for anaphylaxis. She was suffering asthma symptoms almost daily and was constantly exhausted, she had no energy to get through a normal day and no motivation for life as she felt sick and depleted constantly. She felt her health had reached rock bottom. She met with Dr Ling and immediately embarked upon an intensive treatment plan. Valentine saw Dr Ling three times per week for an initial three months, and then reduced treatments to twice per week for the next three months. Six months down the track the results were nothing short of remarkable. Valentine started to feel “normal” and well again. Her energy had returned, she was sleeping soundly every night, she could think clearly, and best of all her asthma was finally under control.

Where prior to her treatment program she suffered asthma symptoms almost daily, six months into her treatment program her asthma “events” were very occasional. Under supervision Valentine was able to reduce her dependency on her steroid puffer by half the dosage. The side-affects she was suffering from the steroids – sore leg muscles, foggy brain, lack of concentration, amongst others, started to diminish. Finally, there was some hope in sight. Valentine was so relieved to finally be in the hands of a Doctor who would treat not just her symptoms but her overall health. “I felt enormous relief,” she says. “To finally feel my asthma was getting under control and that I could go a week without any asthma symptoms was an enormous break-through.”

(from a Traditional Chinese medicine view)

Digestion & Diet – Your digestion is your best immunity. Not all those synthetic products. Keep your digestion in the best shape. Avoid cold drinks, excessive raw food & vegetables, sugar, processed food, refined carbs, moderation is key. Have more light and easy-to-digest meals, keep it at 70% full instead of overeating. This helps minimise digestive symptoms bloating, constipation and swelling.

Mind & Body – Harmony is the best state of your body to achieve the highest level of defence. Keep your relationship with others and yourself in harmony including personal, family, work, and ambition. Also try to minimise anger, stress, anxiety, and fear.

Exhaustion/burn out – Maintain robust energy that is gentle and calm. Avoid overexertion in any forms including physically and mentally or emotionally. Keep a sound and solid physical, mental and emotional wellbeing every day can definitely keep your immunity confident.

Exercise – Gentle exercise that can balance up your sympathetic nervous system. E.g. Tai Chi, Qi Gong, Gentle Yoga, meditation. A balanced autonomic system will help you to enhance your immunity. It is also great in mitigating negative emotional symptoms such as anxiety, depression, fear and anger.

How, Chinese medicine and Dr Scott Ling transformed me into a Healthy Asthmatic – Episode 1

From a sick non-functioning asthmatic to a healthy active young woman with asthma; Join our Founder Valentine and Dr Scott Ling in our web series interviews – The Healing Treatment Part 1This interview looks at how and why Chinese Medicine and acupuncture can help...

END_OF_DOCUMENT_TOKEN_TO_BE_REPLACED

How my Chinese Doctor transformed my life; Join our Founder Valentine and Dr Scott Ling in our web series interviews – The Healing Treatment Part 2 This interview focuses on the process of treating a more severe asthma patient like Valentine. This includes a practical...

END_OF_DOCUMENT_TOKEN_TO_BE_REPLACED

Why asthmatics need both an “Eastern” and a “Western” health action plan; Join our Founder Valentine and Dr Scott Ling in our web series interviews – The Healing Treatment Part 3 The differences between “Healing medicine” of the East and “Emergency” medicine of the...